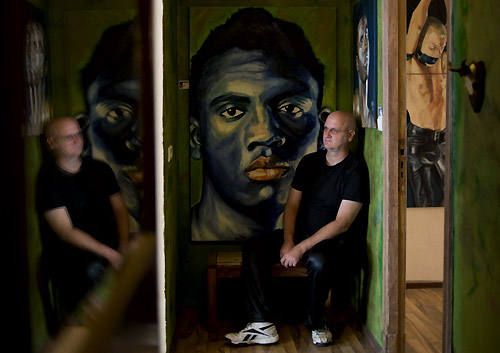 between "dominance and submission"

In the beginning, one stands at their own personal, sexual imagination. Visual interpretations fed by images from the Internet, private photographs, magazines or other media. To get a clearer image of what the future might bring, the idea, using a camera, is adjusted, re-created, experimented on with the assistance of media fragments and tools on the computer. Whenever this happens, I can experiment for as long as I like, until I have created a vehicle by which I can begin my painting process. I experiment with color, arrangements of the objects, effects and details in the media that I can adapt using a color palette of oil paints and blank canvas to work on. I try to blur the line that separates fantasy from reality as I lure you into my world of Fetish and S & M, the seductive smell of leather and levels of fantasy and imagination.

The observer. My visual prisoner will perhaps recognize that I, for the most part, have chosen close friends as a motive to allow you to feel comfortable. A recognized face here and there will always be a reminder that you still have one foot based in reality while the other is in the world of my imagination/creativity. I have had exhibitions in Erfurt (2002), Amsterdam (2003), Zurich (2004) along with others in and around Berlin.

With every exhibit, I hope my artwork inspires thoughtful discussion. I know they will also be deemed controversial, but I welcome the criticism as well. It is all part of an artist's life. I am also always looking for potential models and people who can inspire me to broaden my horizons regarding various depictions / scenarios. Your image would become part of my expression. Your interest, curiosity, self-representation and yes, a bit of vanity, all becoming part of my world of voyeurism and exhibitionism.

To me, a person that radiates energy and character is more valuable than one who only has beauty and muscles to offer. We would have an interview to uncover what you like to do. What your fantasies are and I can get some idea of how to portray your inner self to the outer world. Once we start, we won't finish the Fotosession until I am satisfied I have captured your true essence on canvas. I don't paint for a living but for the joy it brings me. A truly jobless art.

I started painting at age 16 and after studying educational theory and becoming a music teacher, I specialized in photography and graphic arts treatment. After various jobs I decided to go independent in 2003. Painting is very expensive and is not considered an easy hobby. The prices are a simple matter of arrangement and for many first time buyers, the picture was the very first oil painting which they had ever purchased. If you would like to participate in my experiment and be willing to explore the dark side of your personality and have a painting that reflects that dark side, I invite you to take the opportunity and contact me.

(Thanks a lot to LaMont for the translation)